PATIENT ALERT: We now require all patients and visitors to complete our online pre-COVID screening 72 hours prior to your appointment. Please CLICK HERE to complete the questionnaire.  Masks are still required in all offices.   Information regarding COVID-19.

Melanoma is the most dangerous type of skin cancer.

Basal cell cancer and squamous cell cancer are the two most common types of skin cancer. These cancers often form on the head, face, neck, hands, and arms; areas that are often exposed to the sun. 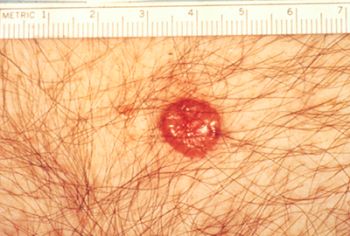 BCCs are abnormal, uncontrolled growths or lesions that arise in the skin’s basal cells, which line the lowest layer of the epidermis, called the basal cell layer. It usually occurs on areas of the skin that have been exposed to the sun and often looks like open sores, red patches, shiny bumps, pink growths, or scars. It is most common on the face. Basal cell skin cancer grows slowly and rarely spreads to other parts of the body. If left untreated, however, it can grow into nearby areas and invade the bone or other tissues beneath the skin. 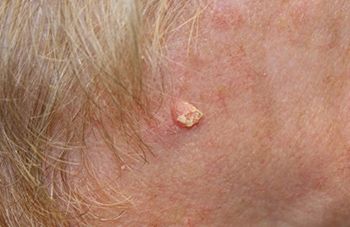 Squamous cell skin cancer is an uncontrolled growth of abnormal cells that also occurs on parts of the skin that have been exposed to the sun – primarily the upper layers (epidermis). These areas typically include the rim of the ear, lower lip, face, balding scalp, neck, hands, arms and legs. But it also may be in places on your body that do not receive any sun exposure, including inside the mouth and on the genitals. SCCs often look like scaly red patches, open sores, elevated growths with a central depression, or warts. These skin abnormalities may crust or bleed at times. Although not usually life-threatening, untreated squamous cell cancer can sometimes spread to lymph nodes and organs inside the body, causing serious complications.

If skin cancer spreads from its original place to another part of the body, the new growth has the same kind of abnormal cells and the same name as the primary growth, it is still called skin cancer.

While melanoma is much less common than basal cell and squamous cell skin cancers, it is the most serious type of cancer of the skin and has become more common every year, because it is much more likely to spread if not caught early. In the United States, for example, the percentage of people who develop melanoma has more than doubled in the past 30 years. If recognized and treated early, however, melanoma is usually curable. If it is not caught early this type of skin cancer can advance and spread to other parts of the body, where it becomes more difficult to treat.

Melanoma starts in cells in the skin called melanocytes, which are the cells found between the dermis and epidermis. They often look like moles, and some actually start out as moles.

These cancerous growths develop when UV radiation triggers genetic defects to skin cells that lead to rapid multiplication of skin cells that form malignant (cancerous) tumors. Melanomas often resemble moles. Some even develop from moles. While the majority of melanomas are black or brown, some may be skin-colored, pink, red, purple, blue or white.

Melanomas can develop anywhere on the skin, but they are more likely to develop on the trunk (chest and back) in men and on the legs in women. The neck and face are other common areas.

The most important warning sign of melanoma is a new spot on the skin or an existing spot that now appears abnormal. Following the ABCDE guidelines can help you identify the usual signs of melanoma:

Not all melanomas fit these rules. If you notice new spots on the skin or see changes in existing ones, tell your doctor or dermatologist. Click to view some photos that can help you identify whether a mole may be cancerous. These photos are meant as a guide, but it is always best to see a doctor who can give you an exam and perform a biopsy if needed.

A rare, aggressive skin cancer that primarily occurs on sun-exposed skin such as the head and neck, as well as the arms, legs, and trunk. MCC usually appears as a firm, pink, red, or purple lump on the skin. Typically, these lumps are painless. Because MCC is a fast-growing cancer it can be hard to treat if it spreads to areas beyond the skin. Learn more about Merkel cell carcinoma from The American Cancer Society.

This type of cancer develops from the cells that line lymph or blood vessels. It can appear on the skin as a darkish/purple-colored tumor (or lesion) or on the inside of the mouth. Although lesions typically do not cause symptoms, they can spread to other parts of the body. KS is caused by the human herpesvirus-8 (HHV-8). Not everyone infected with HHV-8 will get KS. Typically, those most at risk are infected people whose immune systems have been weakened by disease or by drugs given after an organ transplant.

Epidemic (AIDS-related) Kaposi sarcoma develops in those who are HIV infected. Human immunodeficiency virus (HIV) is the virus that causes AIDS. This type is the is the most common type of KS in the United States. Learn more about Kaposi sarcoma from The American Cancer Society.

Lymphoma of the Skin

Lymphoma is a cancer that starts in the lymphocytes--white blood cells that are vitally important in the functioning of the immune system. While lymphoma commonly involves the lymph nodes, it can begin in other lymphoid tissues such as the spleen, bone marrow, and the skin. The two main types of lymphomas are Hodgkin lymphoma and non-Hodgkin lymphoma. Lymphomas that originated only in the skin are called skin lymphoma (or cutaneous lymphoma).